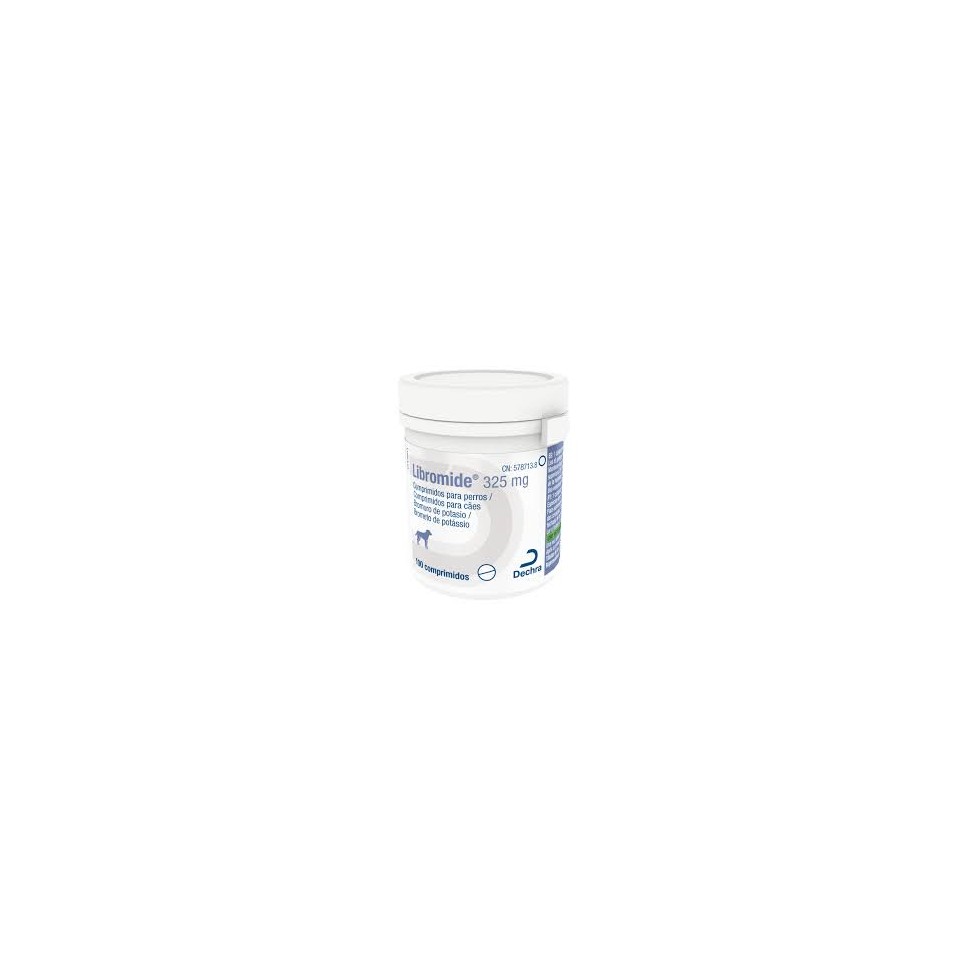 Antiepileptic agent for use as an adjunct to phenobarbital in controlling refractory cases of epilepsy in dogs.

Potassium bromide is an anticonvulsant Halide. Bromide replaces chloride in all body fluids. Competes with the chloride transport across the membranes of nerve cells and inhibits sodium transport causing hyperpolarization of membranes. This hyperpolarization increases the activation threshold of seizures and prevents the spread of epileptic seizures. The effects bromide in active transport through membranes affects glial cells and passive movements of ions to compete with chloride channel in postsynaptic membranes that are activated by neurotransmitters inhibitors. This enhances the effect of GABA (gamma aminobutyric acid), resulting in a synergistic activity of the bromide with other drugs with GABA-like activity, such as phenobarbital.
Pharmacokinetics: The pharmacokinetic properties of potassium bromide have been studied in dogs. The half life is about 24 days. Because this half-life so long, it may take several weeks or months to achieve steady-state concentrations. Potassium bromide orally is well absorbed, reaching its highest absorption in approximately 1.5 hours. Once ingested, the salt dissociates potassium bromide and the bromide ion is readily absorbed by the gastrointestinal tract.
After absorption, the bromide ion is rapidly distributed, as does the chloride, throughout the extracellular space and inside the cells. Chloride is passively distributed across most cell membranes under transmembrane potential, and is likely to be distributed bromide in the same manner. As the concentration increases in the body bromide, chloride concentration decreases in direct proportion to the increase in bromide. The bromide is not metabolized by the body, is eliminated as monovalent anion. Bromide excretion is primarily through the kidneys, where it competes with the chloride by tubular reabsorption.

Indications and species of destination

Dogs: antiepileptic agent for use as an adjunct to phenobarbital in controlling refractory cases of epilepsy in dogs.

Among the common adverse reactions reported include polyuria / polydipsia, polyphagia, vomiting, drowsiness, ataxia (hind limb weakness and loss of coordination), nausea and erythematous dermatitis (skin rash caused by the bromide).
Dogs receiving potassium bromide in combination with phenobarbital typically exhibit elevated serum pancreatic lipase immunoreactivity (FPIC), which may or may not be associated with clinical signs of pancreatitis. In case of pancreatitis or dermatitis, it may be necessary symptomatic treatment. Adverse reactions are also included unusual changes in behavior, irritability or agitation eg nervous.
Adverse reactions may occur in dogs receiving higher doses than therapeutic usually disappear when the dose is reduced. If the dog is too sedated, evaluate serum concentrations of both bromide and phenobarbital, to determine whether to reduce the dose of any of them. Reducing the dose, measure the concentration of bromide in serum to ensure it is within the therapeutic range.

Dogs: Administer to dogs with refractory epilepsy in which the seizure control is unsatisfactory despite being under adequate treatment with phenobarbital, when serum phenobarbital concentrations are at steady state within the therapeutic range. The dose should be determined individually as required dose will depend on the nature and severity of the underlying disease. Administered with food to the initial dose of 15 mg / kg body weight twice daily (equivalent to a total daily dose of 30 mg / kg). It is recommended administration twice daily to reduce the risk of gastrointestinal disorders. Because the half-life of bromide 24 hours, it can take several weeks or months to achieve steady-state concentrations in serum.
For at least the first three months of the start of treatment, should be measured in serum bromide concentrations in four weeks. Expected therapeutic concentration in serum bromide (when used in conjunction with phenobarbital) is 800 to 2000 mcg / ml. It should make adjustments in dose relation to the frequency of seizures, the half life of bromide and bromide concentration in serum.
It must perform a long-term monitoring of bromide concentrations in serum (and associated phenobarbital) as clinically warrant particular case.
It is recommended to monitor the side effects in the highest concentrations in serum bromide.
Its use in dogs with a body weight less than 11 kg should be subject to the risk / benefit evaluation.

Special precautions for use in animals.
• Do not stop treatment suddenly as it may cause seizures.
• It can produce symptoms of poisoning when using this product in animals with renal failure, in which case the dose should be reduced.
• Reducing intake chloride bromide intoxication can occur.
• Administration on an empty stomach may induce vomiting.
• For dogs weighing less than 11 kg may be given not exactly the recommended starting dose of 15 mg / kg twice daily, as the minimum dose that can be achieved by breaking the tablet of 325 mg tablets Libromide for dogs is 162.5 mg.
Special precautions to be taken by the person administering the product to animals.
• Do not handle this product if you are pregnant or think you may be pregnant or if you are breast-feeding.
• Do not use this product if you know you are sensitized bromide.
• Wash your hands immediately after handling the tablets or split.
• Stop operating this product if you develop any signs of skin irritation, including itching, rash, skin peeling or redness. In the case of occurrence of skin irritation or eyes, or if accidental self-administration, seek medical advice immediately and show the package leaflet or the label.
For optional: bromide intoxication can be treated by administering sodium chloride (common salt) or a suitable clorurético agent.

16 other products in the same category: