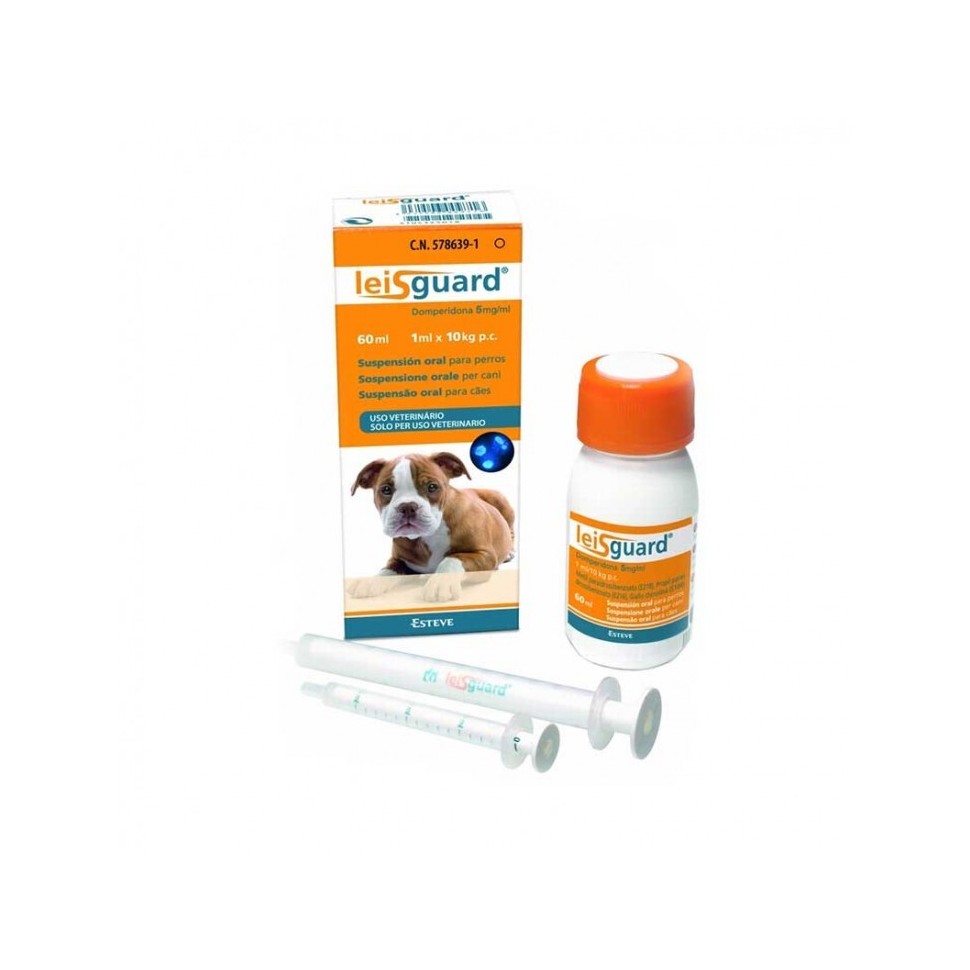 Product efficacy has been demonstrated in dogs exposed to multiple natural exposures
the parasite in areas with high risk of infection.
Control of the progression of canine leishmaniasis in the early stages of the disease (dogs
with a low or moderate degree of antibodies and mild clinical signs such as lymphadenopathy
peripheral or papular dermatitis).

CONTRAINDICATIONS
Not used when the stimulation of gastric motility could be dangerous, for example, if
gastrointestinal hemorrhage, mechanical obstruction or gastrointestinal perforation.
Do not use in animals with known hypersensitivity to domperidone or any component.
Do not use in animals with prolactin-secreting pituitary tumor.
Since domperidone is metabolized in the liver, it should not be administered to patients with
liver failure.

SPECIAL WARNING FOR EVERY KIND OF FATE
In severe infections, treatment should be instituted to reduce appropriate etiologic
the parasite burden before considering treatment with this medicine veterinarian. In all
cases, and taking into account the great variability in disease progression, it is recommended
close monitoring of the patient to tailor treatment to the clinical phase in which
locate the animal, as needed.

Adverse reactions (frequency and seriousness)
This veterinary product is well tolerated dose and recommended treatment period.
In clinical trials, rare cases of galactorrhea were reported during treatment with
Leisguard. This effect is seen as a consequence of the peaks induced by prolactin
domperidone and disappears when treatment is stopped.

USE DURING PREGNANCY OR BREASTFEEDING

Pregnancy - Reproduction studies performed in experimental animals showed no
evidence of teratogenic or toxic to the embryo, drug-related. A dose 20
times the recommended dose showed no signs of toxicity to the mother in the
experimental animals. However, there are not enough well-controlled studies in
pregnant bitches so this drug only be used during pregnancy under
the benefit / risk of the veterinarian.
Breastfeeding - The administration of domperidone on lactating females of various species has
shown to induce an increase in milk production. It is likely that administration of
Leisguard lactating bitches the same effect.
Interaction with other medicinal products and other forms of interaction

Cabergoline is a dopamine agonist that inhibits the release of prolactin from the pituitary.
Therefore, their effects are antagonistic to those of domperidone.
Do not administer with gastric protectors such as omeprazole or cimetidine or other antacids.
Domperidone should not be used with dopamine as dopamine or dobutamine.

DOSAGE AND ADMINISTRATION
0.5 mg / kg / day, equivalent to 1 ml of Leisguard/10 kg body weight, once daily for 4
consecutive weeks.
Leisguard can be administered directly into the mouth or mixed with food. To ensure
must determine the correct dosage of animal body weight as accurately as
possible.
Shake well before use.
There are different management programs:

A) Reducing the risk of developing active infection and clinical disease leishmaniasis
after contact with Leishmania infantum.
In seronegative animals that have never shown signs of infection with Leishmania spp.
but living or traveling to endemic areas, treatment will be scheduled
domperidone taking into account the temporal prevalence of vectors of leishmaniasis
(Phlebotomus spp.) In the current geographic location or destination of the patient.
In high prevalence areas or climate zones with a prolonged epidemiological station
treatment should be given every four months. In the Mediterranean area would be advisable
administer treatment in June, October and February.
In areas of low prevalence may be sufficient treatment period at the beginning of
epidemiological station and another shortly after the end of the season.
In all cases, the veterinarian who will decide the treatment strategy according to the
local incidence of the disease and the possible presence of infectious vectors.
B) Control of the progression of canine leishmaniasis in the early stages of the disease.

Will start treatment immediately after diagnosis to help the animal
self-limiting disease.
Treatment can be repeated as often as necessary Leisguard according to the
clinical and serological monitoring carried out by the vet.

PERIOD OF VALIDITY
Shelf life of the product as packaged for sale: 30 months
Shelf life after first opening the immediate packaging: 8 months

SPECIAL STORAGE
Store in the original packaging.
Protect from light

30 other products in the same category: